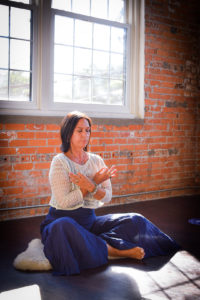 Gina Rossi is a KRI Certified Kundalini Yoga Instructor as Taught by Yogi Bhajan. She was fortunate to study under lead trainer, and author, Hari Kaur Khalsa, from NYC.(Hari Kaur was recently selected by Yoga Journal Magazine as one of the most influential yoga instructors of our time!) Gina’s 200+ hour Kundalini Yoga certification is from the Baba Siri Chand Yoga Center/Yoga at the Ashram in Millis, Massachusetts. For over 20 years, Gina has had an active personal yoga and meditation practice. She has practiced multiple branches of yoga including: Hatha, Iyengar, Ashtanga and Sivananda. She has studied meditation, including Buddhist and Vedic philosophy, under the direction of author and founder, Leonard Perlmutter (Ram Lev) of the American Meditation Institute of Yoga Science & Philosophy in Averil Park, NY. She finds the practice of Kundalini Yoga and meditation to be effective in reducing stress and anxiety, while increasing vitality and radiance!